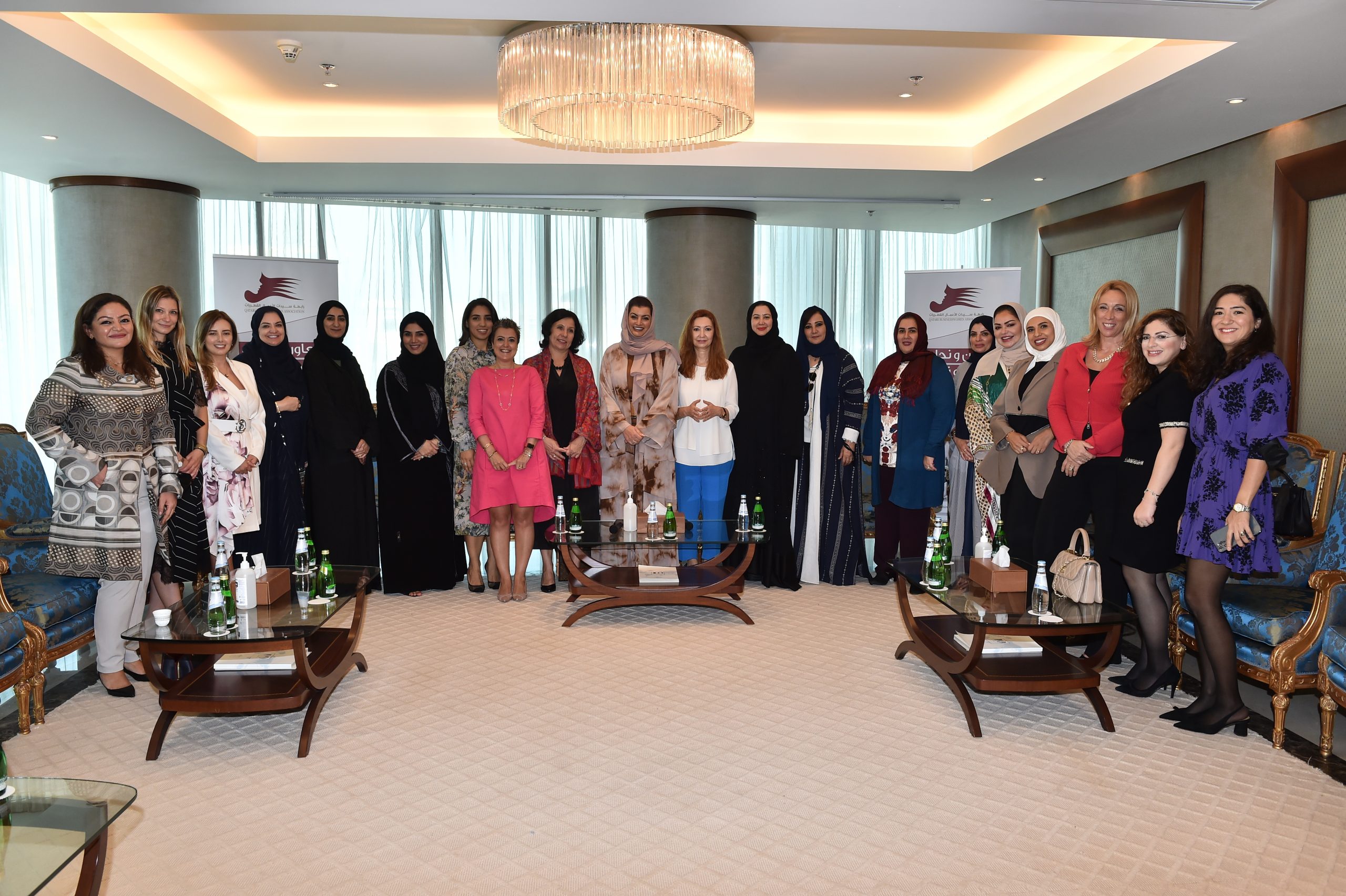 Doha: 5 October 2021 The Qatari Businesswomen Association hosted at its headquarters, the first gathering of the “QBWA Connect” events, that will be organized by the association during the coming period. Through this function, QBWA aims at creating a link between businesswomen, members of the Association, and the business community as a whole. The Activity includes the organization of several functions with Arab and foreign embassies, economic and trade entities, in addition to various local and international events and initiatives.

The event was also honored with the presence of H.E. Mrs. Belen Alfaro, Ambassador of the Kingdom of Spain to Qatar, H.E. Mrs. Karin Fichtinger Grohe, Ambassador of The Republic of Austria, in addition to the presence of the representative of the Dominican Embassy, ​​Ms. Natalia Mena, also Ms. Sarah Abdullah, Deputy General Manager of the Qatari Businessmen Association, and Mrs. Palma Libotte, the President of the Italian Chamber in Doha as well as Ms. Nataly Almanza, Director of The Business Year in Qatar.

At the beginning of the event, Mrs. Aisha Alfardan, Vice-Chairwoman of the Qatari Businesswomen Association, welcomed all participants, addressing special thanks to the Spanish and Austrian ambassadors for accepting the invitation and attending this event, which aims at rebuilding bridges of communication and cooperation, stressing that this event is an important step in a series of activities that will be held by the Qatari Businesswomen Association in the coming period.

For her part, Mrs. Aisha added: The current crisis has casted its shadow over the global economy and affected everyone, but we have to say that, thanks to the wise leadership of His Highness Sheikh Tamim bin Hamad Al Thani, the Emir of the state of Qatar and the policies that the country has followed since the beginning of the pandemic to deal with its negative effects, the Qatari private sector was able to maintain its productivity and overcome the challenges imposed by the crisis.

In an intervention, H.E. Mrs. Belen Alfaro, Ambassador of the Kingdom of Spain to Qatar praised the great role that the businesswomen played around the world during the crisis, saying, “Women have suffered greatly from the negative economic effects of the pandemic, especially female entrepreneurs. However, many female entrepreneurs have shown skills and innovations in their responses to many challenges, which confirms the importance of the role of women as partners in the development of the national economy”.

For her side, H.E. Mrs. Karin Fichtinger Grohe, Ambassador of The Republic of Austria, expressed her happiness to participate in this event, stressing the importance of the role of women in rising from challenges and crises, praising the “QBWA Connect” activity launched and organized by the Qatari Businesswomen Association, in order to restart business and bypass the unprecedented situation.

During the event, the members of the association and the guests discussed the challenges facing the business community in light of the current crisis, agreeing on the need for concerted efforts and the importance of adopting a more comprehensive approach that allows for a better understanding of the challenges, noting that “QBWA Connect” provides a platform for all businesswomen and entrepreneurs to discuss different viewpoints that allow a broader and better vision to overcome any obstacles, benefiting from different experiences.

It is expected that the last quarter of this year, will witness significant activities by the Qatari Businesswomen Association, as the Association seeks to launch a series of events that will be announced soon, which aim at enhancing the Association’s role in developing the business sector and maximizing its role as a partner in the development process, while enhancing women’s contribution to the economic diversification project in accordance with Qatar’s National Vision 2030.